The Positive Power of the Near-Win 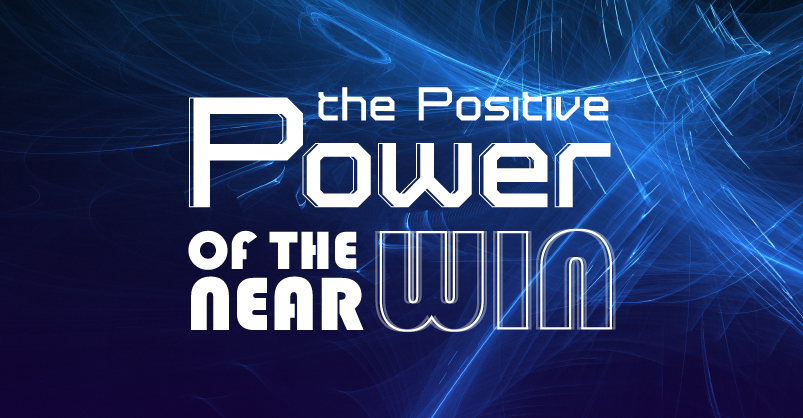 According to new research, narrowly missing out on a big win on the lottery or a promotion at work can boost our drive to be successful at other things.

Devised by Assistant Professor of Marketing, Monica Wadhwa, from INSEAD (Institut Européen d’Administration des Affaires), the hypothesis is; it’s a near win, rather than clearly winning or losing, that is better for us motivationally.

To prove this theory Wadhwa, assisted by colleague JeeHye Christine Kim, carried out a series of experiments on undergraduate students. The experiments measured the intensity of the student’s motivation for reward based on whether they had a near-win in a game or had clearly lost early on.

The students participated in a selection of phone app games, one of which was uncovering eight diamonds in a row without getting a rock. Unbeknownst to the students, the games were rigged and set one group up to either nearly win by uncovering seven diamonds but then a rock on the last tile. The other group played a version where they uncovered a rock on their second tile.

“The current research suggests that managers who want to motivate their salespeople to perform better should think about giving feedback that highlights the individual’s performance compared to someone only slightly better,”

The two different groups were timed as to how fast they walked to claim their reward for participating – a chocolate bar. Analysis of the data demonstrated that students who came closest to winning walked on average 12 seconds faster to the reward than those who knew they had no hope of winning.

Another experiment conducted in the real world involved shoppers who were given lottery ticket scratchies. Those with near wins on the scratchies spent more in a nearby shop rather than those who clearly lost or won.

While demonstrating how our reward-seeking behaviour can be intensified by near-win situations, Wadhwa also found the study to have direct implications for sales and marketing. “The current research suggests that managers who want to motivate their salespeople to perform better should think about giving feedback that highlights the individual’s performance compared to someone only slightly better,” she says.

Further studies are planned to explore possible negative effects of near-winning and the connection to the dopamine system in the brain, which is where reward processing occurs see more info at http://xn--norgescsino-38a.com/.