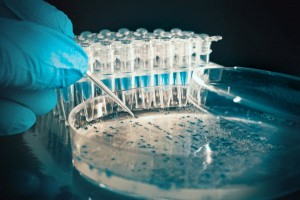 Scientists have made significant advancements to the Geobacter microbe, a naturally occurring microbe that not only withstands the harsh conditions of nuclear waste, but actually feeds on it.

Once it was discovered that these microbes assist in capturing Uranium from solution and mineralising it, adaptive-engineered bacteria, known by the name Geobacter sulfurreducens were developed and patented by Michigan State University.

Microbiologist Gemma Reguera has now increased the strength of the Geobacter bacteria’s tiny conductive hair-like appendages, or pili, increasing their capacity to capture Uranium from water.

The microbes also use the pili to attach to each other and form a protective casing known as a biofilm. The Geobacter biofilm, encased by a network of nanowires and slime, gives the bacteria a shield and subsequently increases their ability to neutralise even more uranium. The improvement also allows the bacteria to survive longer, even when exposed to higher concentrations of the radioactive material. When observing this pairing, it was discovered that the bacteria ferment the glycerol waste to produce bioethanol, which can be reused to produce biodiesel. During the process, the Geobacter remove any waste produced during glycerol fermentation.

As the biofilm concentrates many nanowires around the Geobacter cells, more uranium can be bound and mineralised. Even when exposed to extremely high and toxic concentrations of uranium – levels that would destroy individual Geobacter cells – the biofilms ensured that the bacteria were protected and thus continued to thrive.

Michigan State University has noted that they are in the preliminary phase of discussions with MBI, a bio-based technology “de-risking” enterprise, to develop industrial-sized units that could handle the capacities of a full-scale biodiesel plant.