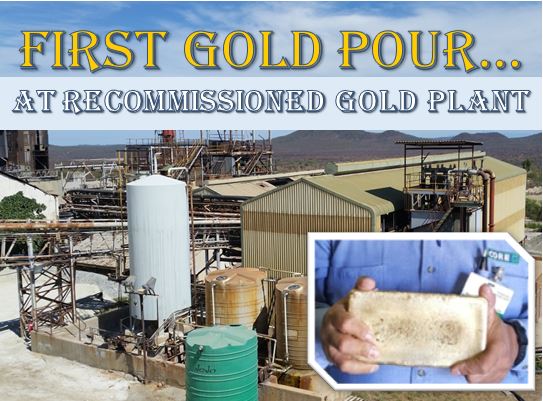 From mid-2015, Core has been leading the recommissioning of a gold processing plant at the Consolidated Murchison Gold/Antimony mine in South Africa.  In November this year, the operation achieved the milestone of the first gold pour (pictured in the hands of Core’s Rod Ventura) from the recommissioned plant.

Stibium Mining entered an agreement in 2015 to acquire the mine, after the previous owners placed the mine in administration in 2014. The recommissioning of the mine by Stibium has led to the re-engagement of 200 local employees at the operation.  Core Resources has been engaged to assist Stibium with several aspects of recommissioning the 600,000  tpa tailings retreatment operation (with a planned expansion to 900,000 tpa).   The work carried out by Core has been substantial and includes:

Three of Core’s senior personnel have been on site at the operation on a rotational basis since June 2015, providing on the ground leadership to the re-commissioning.

Core is now leading the development for an antimony recovery project to take advantage of the significant antimony resource available in the tailings dam on site.

The project is a demonstration of the expertise of Core’s senior staff in providing high value leadership in getting operations moving.